By Karl · 4 Comments · In Investments and the Stock Market
0shares

This is an introduction to a regular series updating what I am doing with my primary portfolio. I will be sharing my stock market investment goals, and how I construct my Tactical Asset Allocation Portfolio. I’ll share some of my holdings, and also share some of the risks involved.

I keep all my investments at Fidelity because I love how they are low-cost, and they usually have deals to keep things commission-free. If you’re still paying a lot of investment accounts, it’s time to switch to a broker like Fidelity. See how they compare to other brokers in this awesome online stock broker comparison tool.

Investing Is About Balance

Investing is all about balance.  I strive for balance in my investments, knowing that I won’t get amazing returns, but I’m far more likely to get wealthy making good returns (singles and doubles) consistently than trying to hit home runs each time and striking out.  Preservation of capital is a top priority.

Let me back up and cover my goals for investments, and why I invest in only ETFs.

My overall goal is to maximize my returns give a few conditions.  I want “limited” risk, I want low draw downs (aka low downside volatility), and I don’t want to spend hours and hours every day managing my money. 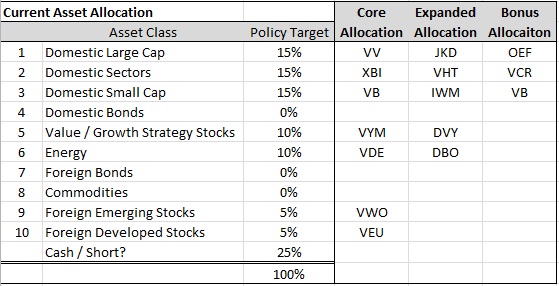 So, the limited risk I achieve by owning only ETFs.  I also consider mutual funds, but I prefer to exit at a price I know instead of the end-of-day price.  Additionally, I have been burned by previous ownership in individual names announcing bad news that then blows through stops.  The ETFs hold multiple names so this type of single name shock.

Portfolio diversification is another method I use to limit risk.  My asset allocation model limits the amount of any one instrument that I can hold to 5% usually, or 10% under certain circumstances.

Finally, I have limited time, and as they say time is money, so I want a systematic way to determine investments, make the trades, and move on.  My model does that, and attempts to limit trades to the minimum necessary.  The above is the sector ranking that I ran last Friday, showing where the sectors stand now, though I only change positions once a month (unless the price goes below the 20 or 40 week moving average.)  The theory that I am using is based in relative strength or momentum.  The academic research shows that there are lasting affects that I am trying to harness.  Therefore, my model weights the top performing sectors more heavily than the poor performing sectors.  As you can see above, Large Cap Domestic currently gets a 15% portfolio weighting, while Foreign Emerging Markets only get 5%.

How I Try To Limit Losses And Risk

One of the things that I really try to limit is losses (duh).  But you may be more aggressive about doing the same when you see the following.  First, here is a great quote From Ken Fisher, Forbes, 1989:

Here’s the paradox: The odds are overwhelming I will end up richer by aiming for a good return rather than a brilliant return — and sleep better en route. Folks who seek a killing usually get killed. Gunslingers get shot, and often in the foot, with their own guns. While there is always some guy around on a red-hot streak, his main function is to tempt the rest of us into becoming fools and paupers. A return of 15% to 20% annually is a lot more than most folks realize, or need. If a 30-year-old with $10,000 in an IRA gets 15% annually, he’ll be a millionaire before normal retirement. That’s the power of compound interest. If that same 30-year-old were to sock away another $2,000 per year at 15%, he would end up as a 65-year old $3 million fat cat. At 20%, it’s an incredible $13 million. That’s a lot, but it’s not too much to ask. The two most definitive studies ever on long-term returns, the Ibbotson/Sinquefield and Fisher/Lorie studies, both point to average annual returns for stocks of 9% plus per year going back to the mid-1920s. So 15% to 20% per year is really 66% to 100% better than the market as a whole. That’s tough but doable. Consistency is the key. It is close to impossible to get a good, long-term, rate of return if you suffer serious negative numbers en route. It’s the math. A single year that is down 30% means you have to get 30% per year positive returns for the next four years to get back on track for a 15% annual average. Or, if you score 20% annually for four years, and then suffer a 30% decline, your five-year average return is only 7%.
(This is also quoted fairly regularly by Jeff Saut – over here and here at Minyanville)

A big quote I know, but important.  If you have a large loss, it really is almost impossible to get back to where you would be if you had a more consistent yet lower return.

If you have a method that can return 10% annually, first off you are doing pretty well.  But if you’re shooting for the stars, looking to make the “quick buck”, you may want to re-evaluate.  Looking at the returns required over the next 4 years after a loss that must be averaged in order to get back to that 10% annual return.  A 20% loss in the first year requires 4 years of almost 20% returns.  That is going to be pretty tough, especially without taking on even more risk. 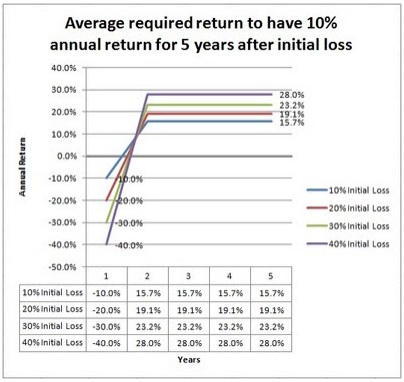 The moral of the story:  Protect capital, even at the expense of higher returns, because it is very difficult to recover.

Some people put money into the stock market in a manner that is more like gambling than it is to investing.  You must manage risk rather than pursue return.  You could do everything right for years, and one day the risk can catch up with you.

Super Bowl, World Series – they don’t know what pressure is. In this building, it’s either kill or be killed. You make no friends in the pits and you take no prisoners. One minute you’re up half a million in soybeans and the next, boom, your kids don’t go to college and they’ve repossessed your Bentley. Are you with me? — Louis Winthorpe III, Trading Places (1983).

One last reminder, this is what I’m doing.  This could change at any point without notification.  I am not an investment adviser.  This is not advice.

What for further updates on at least a monthly basis for the changes in holdings each month as a make them, and I’ll track performance also so you can decide if you want to follow along or use me as a contra-indicator.  Readers, what is your investment plan and strategy?  What are the returns that you make annually?  How do you limit risk?