Feedback, your compass for success Can snowboarding help you master your money? 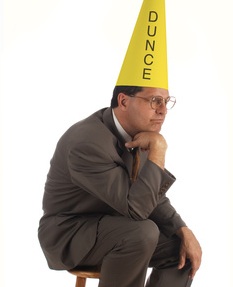 Don’t be a dunce when it comes to retirement

You heard me.  And this isn’t about whether you should be putting money in a Roth IRA or a Traditional IRA first.   It is simply that those contributing directly into a Roth IRA are being stupid.

The reason I say this is because contributing to a Roth IRA are missing out on a great benefit that the IRS has allowed a few years ago.  Starting in the 2010 tax year, the IRS allowed all taxpayers, regardless of income, to convert traditional IRAs to Roth IRAs.  Besides being a benefit to those that wanted to invest via a Roth IRA but were above the income limits, this also lets everyone else convert traditional IRAs to Roth IRAs, whether the contributions to the traditional IRAs are deductible or non-deductible.  So what you ask?  That just makes me go through two steps to get what I could have gotten in one.  Thanks random italicized type, I was getting to that.

The benefit you get from converting a traditional IRA to a Roth IRA, is that it also allows you to recharacterize that conversion should you want to do so.  And what is recharacterization?  That means that you can essentially undo the conversion from the traditional IRA into the Roth IRA, going back and recharacterizing the IRA back into a traditional IRA.  The reason that you would want to do this is perhaps your Roth IRA decreased in value after the conversion.  Now you could just sit on those losses and complain about it, but I’d rather not pay taxes on money that I don’t have any more.   This is one of those things that really is a free lunch given the circumstances.

How about an example?  Traditional IRA to a Roth IRA and re-characterized back:

Let’s say you’re in the 25% tax bracket (each marginal dollar of income at this point you would have to pay 25% tax on).  If you had put $5,000 that you’ve already saved into a deductible traditional IRA, you would have saved $1,250 in taxes (you income is $5,000 less x 25% tax rate = savings).  You immediately convert that traditional IRA into a Roth IRA.  Since it was deductible, the conversion to Roth makes you pay taxes on the converted amount, so we’re back to where you started if you had contributed directly to the Roth (which, would have been stupid).  The reason is, let’s say your Roth decreased in value because of a downturn in the market.  You Roth is down 50% to $2,500 in value.  Before the deadline of October 15 of the tax year due (2011 taxes are due April 17, 2012, re-characterizations must be requested by October 15, 2012) you could re-characterize that back into a traditional IRA.

how much government money are you losing out on? Potentially thousands.

Think ahead when doing taxes!  Your 2012 contribution could be made today, and you’d have until Oct 15, 2013 to potentially recharacterize the conversion!  That’s 18 months of downside risk protection!  Looking at that red bar, who wants to pay that red bar of taxes when you don’t have to?

Now instead of paying $1,250 in taxes on income that is now only $2,500 because of market losses, you have $2,500 of income that is deductible, which saves you $625, a net savings in taxes of $1,875 using calculator.  The government almost pays back your losses in tax credits!  It’s even better than a government job, because you don’t have to work!  Even if it was a non-deductible traditional IRA, the benefit is that the recharacterization lets you harvest some of those losses (which you normally can NOT do in IRAs).  Non-deductible in the above example still lets you save the $625 in taxes paid on a losing investment.

You do want to do this immediately and with separate accounts each time.  By this I mean set up a new traditional IRA, and convert it into its own Roth IRA.  Don’t covert it into an existing Roth IRA.  This is a pain, but it gets around IRS rules making you convert or recharacterize taxable and non-taxable portions of an IRA pro-rata, and relieves you of the burden of potentially calculating gains or losses in either account again.  You report a re-characterization to your trustee and on form 8606 to the IRS, then file an amended tax return with the additional label of “Filed pursuant to section 301.9100-2” on the return.  See IRS publication 590 for more details on recharacterization.

So don’t be stupid, contribute to a Roth IRA via an intermediary traditional IRA, and let the government pay any losses you may incur.  If you’d like to see other posts about Roth IRAs, take a look at the Roth IRA Movement.  There are over a hundred bloggers contributing to this movement.

Readers, do you think I’m being stupid by suggesting this?  What do you think about Roth IRAs as a retirement vehicle?  Do you like to pay known taxes today or unknown taxes in the future?

ShareTweetPin0sharesYou heard me.  And this isn’t about whether you should be putting money in a Roth IRA or a Traditional IRA first.   It is simply that those contributing directly into […] More