How to Make an Extra $10,000 Per Year by Freelancing Investing for Beginners: Ideas to Get Started

How to Get Your House Ready for Sale 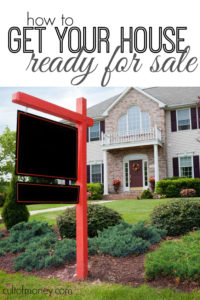 Buying a house is such a stressful, frustrating, drawn-out process which has me wondering – will selling a house be even more stressful?

Jamie and I have been going back and forth with the bank over the past few weeks providing them document after document. (Because it might inconvenience them to ask for everything all at once, right?) Now it looks like we *might* be closing on the new house pretty soon. (I’m holding my breath as I no longer trust the bank!)  And now, we’re left to get this house ready for sale.

I had my real estate agent/family friend walk through our current house to see what we needed to do and the verdict really wasn’t too bad.

Here is what we were told we needed to do get your house ready for sale.

This was the main point the realtor stressed which I was shocked and even slightly amused by.

Jamie is a hunter and while I have pretty much banned any animal or animal parts from being hung on the walls I left the garage as fair game. So the garage has a lot of hunting paraphernalia including turkey feathers, deer antlers, and other miscellaneous items. I was told I needed to get rid of all of it before listing the house.

I happened to find this amusing considering I live in a very country town and there aren’t many men who are not hunters. Regardless I was planning on boxing as much stuff up as possible anyways.

Our controversial items were hunting related. But I can also see this being religious items too. Probably not a good idea to offend people who may potentially buy your house!

Our house isn’t large by any means but I wouldn’t consider it small either. It’s around 1200 square feet and fits the four of us rather comfortably.

We were advised to get rid of large pieces of furniture to make the house look bigger.

Again, I think this is a good idea and something I was already planning on doing.

We have a full walk out basement which houses the laundry room and the girls’ playroom. The other seventy percent of the basement was just a catch all for junk.

We cleaned out all the junk (well, almost) and hired a painter to paint the entire basement a bright white. I cannot even begin to tell you the dramatic difference the white paint has made. We could have done the painting ourselves but it was a huge job and right now we’re just strapped for time.

This wasn’t suggested by the realtor but I knew this had to be done. You see, before I came along Jamie had this bright green outdoor carpet on the front porch. It looked like it was from the 1960’s and was hideous. I pulled it all up.

Little did I know that I would have green carpet glue stuck all over the concrete afterwards. I’ve now spent well over ten hours scraping it off with a straight razor. (Neither the power washer or adhesive removed would take it off.) I couldn’t get all of it off and instead had to paint the concrete. It turned out looking so much nicer and cleaner and was an instant boost to the homes curb appeal.

I really want this house to sell as fast as possible so there are a few others things I’m doing as well such as:

That list make look small but in my head it’s huge. I feel like there is so much that can be done to get a house ready to sell that I might never feel like it’s good enough. At the end of the day I need to just list it when it comes time, see what happens, and go from there.

What steps did you take to get your house ready for sale?

Tagged with → get your house ready for sale • selling a house

Video games and your finances have a lot in common.  It’s easy to keep score, there are multiple strategies that lead to winning, and there are always tips and cheats […] More
14shares