Why You Should Put a Focus on Creating Habits Buying a Home Without a Realtor: 6 Things You Must Do

How to Make Your Worst Case Financial Situation Not So Bad 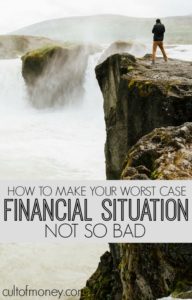 I feel like I’m in a pretty good spot financially right now. But for some reason it’s like my brain just doesn’t believe it will last forever.

Really, this isn’t a new thought process for me.  Ever since I’ve had kids I’ve thought about, or at least planned for, worst case scenarios.

That’s because I feel like money comes in ebbs and flows. Especially now that I’m doing the type of work I’m doing. One day it could all come crashing down.

The good thing though, is that when it comes to money you CAN make your worst case scenario not too bad. That’s a pretty good feeling. To think that my worst case scenario will be making my grocery budget stretch further rather than losing my house or going bankrupt.

But you can only make your worst case scenario not-so-bad if you plan (and execute that plan) when times are good.

These are the things I do when times are good………….(And the order of operations I think makes sense if you’re trying to make your worst case scenario not so bad.)

You Need a Solid Emergency Fund BEFORE You Pay Down Debt

A lot of people follow Dave Ramsey’s baby steps and he has definitely inspired a lot of people to clean up their financial act. That’s awesome, really. But there a few of his steps that just don’t make sense to me.

What happens if you save $1,000, start paying off your debt, and then lose your job? All you have is that $1,000 to fall back on and you still have your monthly obligations plus all those debt repayments to make. You’re going to sink financially. Or go bankrupt. Or lose your house/car and anything else you have financed. And you’ll definitely be stressed to the max.

You need an emergency fund that is large enough to carry you through at least a few months of regular expenses, including minimum debt repayments. If you have a small emergency fund you’re not going to be able to last very long before defaulting on all of your debt.

You do NOT want to be in that position.

Paying off debt should be high on your priority list but only after you have a big enough cash buffer to get you through a few months of tough times.

We all know bad stuff happens when you least expect it. That’s what an emergency fund is for. It’s pretty risky to have only $1,000 set back – especially if you have many debt payments to make.

Having a decent amount in savings is probably the #1 thing you can do to make your worst case scenario not so bad.

After you have that comfortable emergency fund go full force on your debt. It really doesn’t matter whether you use the snowball and eliminate the lowest debt amount first or use the avalanche and eliminate the debt with the high interest rate first.

Do whichever method motivates you.

I personally like the snowball method because seeing one debt wiped out quickly would keep me highly motivated.

The only debt I have is the mortgage, which I’m working on paying down. I’ve made good progress considering we’ve only had the mortgage for a few months but I still have a long way to go.

The less you owe other people the more financially stable you become.

Buy the Things You Need

There’s more to money management than just saving, investing and paying off debt. It often makes very good sense to buy the things you need (like really need) when times are good.

For instance, we just had a new roof put on the house. The original one may have lasted another year or two but we wanted to get it done now while we had the money to do so. We also spent a significant amount of money getting a fireplace insert and chimney liner put in the fireplace. While this was an upfront investment I can only imagine how much this will save us versus trying to heat the entire house with baseboard heaters.

Another thing I have on my “to-buy” list is Eden Pure heaters for my daughters’ rooms. Their rooms are the only ones that don’t seem to get enough heat from the fireplace and the infrared heaters are more efficient and safer than the baseboards.

If you’ve come into extra money and there are things you really need like car repairs, home repairs, or anything else that has to be done in the near future, then it makes sense to get it done while the money is there.

Get it over with and paid for and you won’t have to worry about it anymore.

Of course, if you don’t have any emergency fund savings yet then I’d definitely recommend you balance out the pros and cons of saving versus buying. You’re the only one who knows what’s really best for you and your family.

If you have extra money leftover then start saving for other things you need.

I’ve recently (finally!) set up automatic contributions to both of my daughters’ college savings accounts and also have my retirement and dividend stock accounts to automatically deduct from checking. Every now and again I go in and add extra money to these or slowly up the contributions.

And last but not least, while it’s very important to plan for the future it’s equally important to enjoy your life now. Don’t feel bad if you end up spending $50 to go do something fun with your family. Just keep it balanced 🙂

What type of things do you do when you have extra money?

If you’re looking for a job with good security, fantastic benefits, a secure retirement that can include a traditional pension, and at the same time something that provides interesting work, […] More
1shares