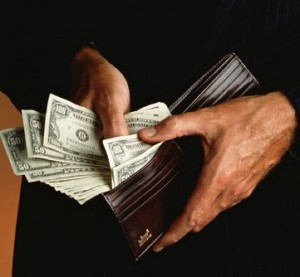 You have no idea where your money is going each month. You’ve tried to track your spending before but have never been able to follow through.

I know the feeling. I’ve been there several times, too.

The other day I told one of my friends that I was successfully tracking my spending this month. This is something that I’ve had trouble doing in the past and that, apparently she has, too. She asked if I thought there was a way to use baby steps to successfully do this.

While the steps to tracking your spending aren’t complicated I have found that there are some tips that are detrimental to success.

While the month isn’t quite over I’m confident that I will have fully tracked my spending down to the dollar. Here’s what I’ve learned.

The number one reason that I’ve never been able to follow through on tracking my monthly spending is because I was worried about every detail being perfect. And, it doesn’t need to be!

Also, instead of listing items and dollar amounts individually just group them together into categories. Which brings us to the next point.

Using broad categories goes hand in hand with ditching the perfection. It’s much easier and less stressful to track a few broader categories than to track several smaller categories.

For example, instead of tracking toiletries, food, and household cleaners into separate categories I lump them all into a grocery category. I know that the bulk of my money is spent on food and putting the few dollars I spend on non-food household items goes fine in this category.

I track utilities and bills as individual categories since they are only one monthly payment. However, for the stuff that I’ll have to record several times throughout the month I use broad categories.

Another issue I’ve had in the past is letting receipts pile up before recording them. If you wait too long to record your purchases, tracking your spending becomes tedious instead of fun.

It’s best to take a couple minutes every day to sit down and plug your numbers in.

I’ve always been a pen and paper kinda girl but I’ve found that this methodology doesn’t work well for tracking my spending. Instead I opted to use an existing template I found on Microsoft Excel.

In addition to using a spreadsheet you could also use an online program, such as Personal Capital, that pulls information from your bank and credit card accounts and tracks your spending for you.

I didn’t start to track my spending because I was blowing my budget each month. I knew approximately what I was spending in each category and I also have relatively low expenses compared to many others.

The point of me tracking my spending is to see to make myself more aware of what I’m purchasing before swiping my debit card. I’ve vowed to make this year a good year savings-wise and I’m going to follow through.

With that said it’s important to note that if you aren’t really sure where your money is going each month, don’t be too hard on yourself.

Tracking your spending definitely isn’t the most exciting notion in the world, but it will give you a clear picture of exactly where your money is going.

Just remember you don’t have to be super detailed to successfully track your spending. Keep it simple and throw perfection out the window and your chances of staying on track will be much greater.

All useful tips, thanks. My wife and I do things a bit differently. I’ve gotten in the habit of always asking for a receipt when I spend money, then use these as reminders to enter my spending into our system each day. My wife records her spending on a little scrap of paper she keeps in her purse. Then she sits down to enter all the data every once in a while. We usually only miss about $500 per year in spending. I know because I reconcile our actual cash on hand to what the system says we should have on hand at the end of each year.