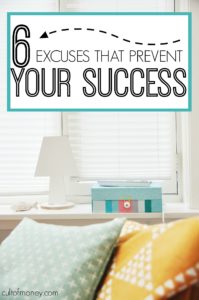 Every year hundreds of thousands of people set goals but only a tiny fraction – 8% – achieve them. What happens to the other 92%? The biggest problem is excuses.

If you want to be in the top 8% this year it’s time to kick those excuses to the curb. Here are six excuses that prevent your success.

I don’t have the time is one of the biggest cop outs there is.

If you honestly feel this way take a few minutes and see where your time really goes. This will show you where your priorities lie. Saying that you don’t have the time to accomplish a goal could really mean the goal just doesn’t hold enough importance to you.

Remember, you have the same 24 hours in your day as everyone else. If you want to accomplish something, you will make the time.

There are many things that money is needed for and there are many that it’s not.  More often than not when someone says “I don’t have enough money to accomplish my goal” they’re using it as an excuse to mask their fear.

Many successful people have started off without a penny and have figured out how to obtain the money and resources they need. Others took an alternative path and found ways to achieve success without having to worry about money at all.

Find a way around your money problem. Solutions are everywhere.

I’m often asked to help people get started with a work from home position. I almost always recommend anyone looking to build a location independent career to get started with some sort of freelancing.

The problem though, is that most people are too afraid to fail. Instead of putting themselves out there and trying to find clients they tell themselves (and me) that they need to learn more first.

The truth is you’re probably going to fail at least a few times on your way to success. Learning more, to the point where all you do is learn and never take action, is completely useless. Get out there and take the first step.

Newsflash: no time is the right time! When you’re attempting something that’s new and important there will never be a right time.

Achieving success will only come after you place yourself in an uncomfortable position and put in the work. If you’re afraid to step out of your comfort zone no time will ever be the right time.

I don’t have a college degree or any special education. For a long time I thought I deserved less money than others in my field who did have a degree even though I knew I did a much better job. I don’t think that way anymore and you shouldn’t either.

There are many cases where having a degree doesn’t matter. (And if it really does matter you can get one.) But most of the time the skills that you need can be learned for free. Don’t doubt yourself. You can obtain the skills you need.

When I first started an online freelance business nobody thought that I would be able to earn more than a couple hundred dollars per month and many thought I was wasting my time. A year later I replaced my day job income.

When I said I was going to grow a blog large enough to support me financially I was often met with a response such as “That’s cute.” Aside from my husband I was the ONLY person who knew I could make it work.

If other people are doubting you use it as the fuel to your fire. Do what you know you can do and prove them all wrong.

While there are plenty of excuses you can make to not reach your goals at the end of the day you’re the one who has to live with the decisions you make. If you’re ready to make 2017 amazing make a vow to stop all the excuses, step outside of your comfort zone and start on your path to success.