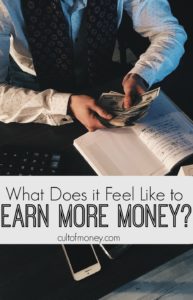 Have you wondered what it would feel like if you could double your income in a couple years’ time? Would it feel magical or a bit anticlimactic? Would your plan for that extra income go smoothly or would you succumb to lifestyle inflation?

Today I’m going to get personal and share what my journey has felt like. Keep in mind that No, I am not a millionaire, I haven’t made six figures (yet) and to some of you my story probably won’t be relatable. But to a large majority I think it will.

Where I’ve Come From

For many of you this story is nothing new. But if you are new I want to first give you some background so you know exactly where I’m coming from.

I live in a small town in rural Ohio. What might be considered a decent job around these parts would pay in the range of $10-$13 per hour. Most would consider a $40k per year job with benefits pretty darn good.

It’s also important to note that both income and expenses are low where I live. Houses are cheap here and so is the general cost of living.

In 2012 I was working two jobs and for the time I ever I made a little over $30,000. To me that felt pretty amazing but since I was divorced and “starting over” I needed more cash to fulfill my goals. Plus there was no way I could keep up with two jobs and two kids forever.

That’s when I started working online. I built up my income slowly and replaced what I was making at my jobs with online income. For the next couple of years I earned in the $30-$40k range.

In the span of four years I have almost tripled my income.

Again, I understand that for many earning this amount doesn’t seem astronomical but for me it most definitely was a total game changer. So how did earning more make me feel?

Perhaps my biggest realization has been that once I got past a certain point money just didn’t feel important me. When I was earning half as much and was supporting my two daughters by myself money felt VERY important. Now that I’ve hit many of my goals, money just doesn’t feel as important.

Instead, what feels important is accomplishing goals. While I’m thankful that I’ve been able to build financial stability along the way I’ve also come to appreciate that the excitement is in the challenge.

Honestly, after you’re able to meet ideal living arrangements and can cover all the basics without relying on debt and with having a cash buffer, the excess just isn’t exciting.

There are some good things about earning more – like being able to purchase items my kids need without having to look for the best deal or wait until the next paycheck. But earning $80k hasn’t made me any happier or better of a person than earning $40k did.

If you’re on a mission to earn extra money here’s what I recommend:

# 1 – Learn to live within your means before you have extra income. If you don’t you’ll end up just pissing all your money away like you do now. Seriously, extra money with the same bad habits won’t do a thing for you.

# 2 – Have goals in place. Goals are what kept me going. After a certain point accomplishing goals is what helped contribute to my happiness and overall personal development.

# 3 – Realize that money doesn’t equal happiness. A lack of money can cause you to be downright miserable but once you get your financial cards in order an excess of money won’t necessarily make you anymore happy.

I don’t want this post to come across as me feeling ungrateful about earning more. That’s not the case at all. In fact, I’ll continue trying to earn more and save the money for my family and our future.

I just think it’s interesting how I thought earning more would make feel and the reality of how it does feel. Once you get your finances in order the money goals become less important and new challenges are needed to keep that same level of excitement going.

If you’ve ever been in this position, how did earning more money make you feel? Am I crazy?