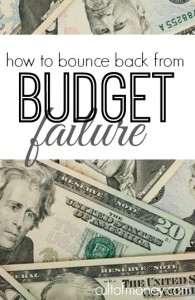 I’ve had a pretty bad month as far as the budget is concerned. I thought this month was going to be fantastic. On paper it looked like I’d be able to save more money in March than I had ever been able to save before.

Some of it was random and the other things were completely my fault. Today I want to talk about what do when you have an epic budget failure. (I think I’m needing to give myself a little pep talk!)

I normally hate when people say that they are “too busy” to manage their money well. And as much I hate this that was me in the month of the March.

I was too busy to balance the checkbook for two weeks…….

I was too busy to cook dinner………

In fact one of my big goals for the year was to not eat out at all! I was adamant about this goal for the first two months of the year. I was pumped up and I knew I could do it. That was, until March rolled around.

There were so many nights where I was just rundown and couldn’t fathom the thought of cooking dinner. I totally slipped up.

I could have completely avoided the eating out trap if I would’ve done a little planning ahead. Heck, even keeping a few frozen pizzas for those super busy days would’ve prevented some major money leakage.

I already started fixing this little problem again by making out a list of possible dinners for the week. Instead of putting a dinner to each day I just write down seven different options and I can choose what I feel like making on the day I feel like making it. This always works well for me and only takes me ten minutes a week to plan!

The same should’ve went for the actual grocery shopping. When I shop with a list my spending stays on track. When I walk in the grocery store without a list I sometimes spend nearly double of what I have planned.

Keep a Record of Bi-Annual Bills

Another thing that caused my budget failure (which again was totally my fault) was forgetting about the six month auto insurance bill coming due.

As soon as I got the bill I knew my savings plans were out the window. Had I kept a little note in my checkbook I would’ve remembered.

In addition to the insurance bill I also got $450 worth of physical therapy bills that I hadn’t planned on getting. I thought insurance would cover those, but again, asking a few questions would have helped me plan for this.

Learn From Your Mistakes and Try, Try Again

None of us our perfect. I think admitting that we sometimes make some really stupid mistakes is helpful in getting us back on track for the next month.

Things will come up, sometimes you’ll fall of track, but as long as you get back up and try again your budget failure months will end up being a glitch in the radar.

How do you recover from budgeting failure?