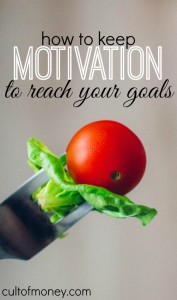 We’re in the second week of January now – how are those resolutions holding up?

It’s been statistically shown that only eight percent of New Year’s resolutions setters achieve their goals. There are many reasons why this holds true. Setting too many goals, being unrealistic, and a plain ole lack of motivation are some of the causes.

By reading other people’s New Year’s resolutions on Facebook it’s easy to see that most people are setting realistic goals but somewhere in the mix they lose their motivation. If you feel the same way here’s how you can motivate yourself to stick with your goals this year.

Start with the End Result in Mind

When setting goals it’s easy to look at a big number (I want to save $5,000 or I want to lose 15 pounds) but instead of keeping that number in your head, visualize what it will feel like once you achieve the goal.

When you shift the focus from the number and place it on the eventual outcome, you’ll be far more motivated to stay on track.

Here are some examples:

Save a $5,000 Emergency Fund: You’ll feel less stressed about money, won’t be living paycheck to paycheck, and will have a huge sense of empowerment after your goal is achieved. When an unexpected expense pops up you’re not going to be scrambling to come up with the money and you won’t have to “rob Peter to pay Paul.”

Lose 15 Pounds: You’ll feel more energized and confident in yourself. The confidence that you feel will positively impact every single area of your life, creating a ripple effect.

When you start to feel like the goal you set yourself is too overwhelming and you’re on the brink of giving up, stop and focus on the end result.

I think now we need to go over some common sense principles that, unfortunately, a lot of people completely miss.

You need to set yourself up for success from the beginning and quit self-sabotaging.

For practicalities sake let’s go back to the losing weight example. If you gained 15 pounds by eating a bag of Hershey Kisses every night and you now want to take that weight off, what’s the first thing you should do? Remove all Hershey Kisses from your house.

It sounds so basic and, it is. But just because it’s basic or common sense doesn’t mean that people actually do it.

If you want to save more money this year one of the very first things you should do is set up automatic deposits into a savings account. You’ve got to treat your savings like it’s a bill. That might mean you eat out less, skip going out, or can’t buy new clothes. If you that’s the case and you still really want to buy those things then you have GOT to find a way to earn more money.

Setting up automatic contributions to savings is basic but it works and prevents you from spending your money on things that might not matter.

Let’s sum this point up with do what you have to do without making excuses. No more self-sabotaging.

Look to Other Successful People

No matter what your goal is there’s someone else who’s been in your position and achieved the results you’re after. Find those type of people and draw inspiration from them.

Join groups, whether that be online or in person, for motivation. You could also look for a mentor, coach, or find a friend to be your accountability partner.

Simply surrounding yourself with the right people will up the chances of your success.

Know That You Will Be Challenged

The thing with setting goals is that goals are not easily attained – they have to be worked for. This pretty much guarantees that at some point in the year you’re going to run into some a challenge.

When you are hit with that tough decision, don’t give up. Go back and think of the end result and talk to your accountability partner or mentor about what you’re facing.

It’s okay if you have one or two rough months where things just aren’t lining up as long as you don’t throw in the towel. Nobody is perfect and you’re not either. You’ve got to persevere.