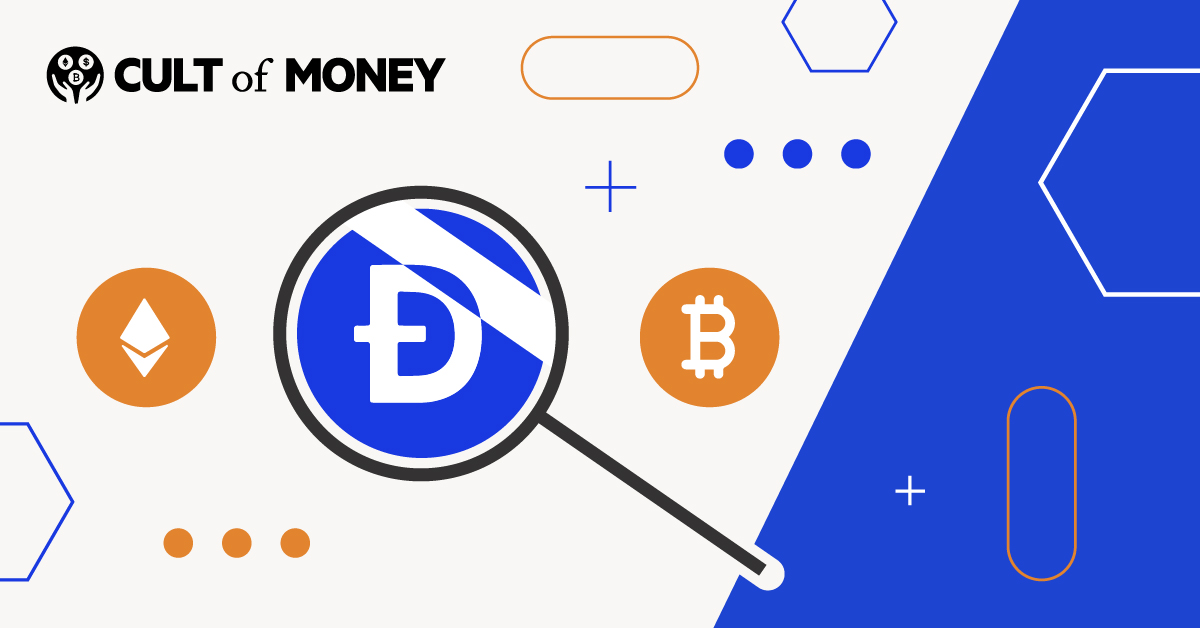 One of the questions many people ask when it comes to cryptocurrencies and other assets is this: “What is it backed by?”

This is a natural question. After all, cryptocurrency investing involves investing in purely digital assets, which is much different from investing in assets like stocks that represent ownership in a company.

So when looking at a cryptocurrency, you might be wondering what gives it actual value. Let’s take a look at cryptocurrencies and how they’re backed.

Table of Contents
What Backs A Cryptocurrency?
Cryptocurrency vs. Fiat Currency
Are Stablecoins Backed By Anything?
What About Tokenized Assets?
How Are Your Transactions Protected?
The Bottom Line

What Backs A Cryptocurrency?

The short answer to, “Are cryptocurrencies backed by anything?” is no.

When you look at a bitcoin or other cryptocurrencies, there isn't an underlying asset that gives it value. Instead, the value of crypto like bitcoin (BTC) is derived from the uses that others have for it, as well as scarcity since there's a limited number of bitcoins available.

Other cryptocurrencies can also derive value from the demand for the platform they’re built on and utility.

For example, Ethereum (ETH) is popular in part because its blockchain protocol makes it possible for developers to create apps and execute smart contracts to serve a variety of puposes, like crypto lending and exchanging tokens.

Similarly, the Solana (SOL) blockchain arguably has value because it can faciliate a large number of transactions per second (TPS), which is useful for decentralized apps (dApps) and for transfering cryptocurrency.

However, there’s no real backing for many cryptocurrencies. Instead, those who use a cryptocurrency for transactions or as a store of value need to have faith and trust in the underlying blockchain.

The idea behind blockchain technology is that it can be a “trustless” system that strangers can use to transact business. In many cases, it can be a way to directly interact with another person, without the intermediary services of banks and escrow accounts.

Choosing a type of money or currency to use as a medium of exchange or store of value and having nothing to back it isn’t a new concept. In fact, governments do it regularly by issuing fiat currency.

“Fiat” is a Latin word that basically means “let it be done.” It comes from the word “fieri,” which means “to be made” or “to be done.”

Basically, a fiat currency is one that is declared by an authority to be the official medium of exchange and universally accepted in that country. In the United States, the U.S. dollar is the fiat currency.

In contrast, fiat currencies are “backed” by the faith and credit of a government. For example, the U.S. dollar is considered to have value relative to other currencies based on the large tax base and the fact that the United States has the largest economy in the world. When a country is considered stable economically and politically, it’s more likely to have a trusted currency.

With many cryptocurrencies, that “backing” comes in the form of the number of people who use the cryptocurrency platform and whether users trust the blockchain to operate in a functional manner — and in the way it’s “supposed” to operate.

Another way to conceptualize the difference between crypto and fiat is by examining utility.

Here's a breakdown of how crypto compares versus fiat in terms of the value it holds and overall utility:

In both cases, there isn’t anything tangible backing the currency.

The same is true of cryptocurrencies. And while cryptos might fulfill functions and the blockchain might provide the building blocks for the next iteration of technology infrastructure, cryptocurrencies aren’t backed by anything tangible.

However, the main difference is that cryptocurrencies have many interesting use-cases thanks to the power of decentralized finance (DeFi).

For example, cryptocurrencies like Bitcoin are often treated as stores of value. But you can also use your crypto to take out loans, or earn passive income through staking or crypto savings accounts.

Plus, you can transfer cryptocurrencies around the world without relying on middlemen like banks or governing bodies. And completely decentralized exchanges like Bisq and Uniswap don't even require verifying your identity or jumping through regulatory hoops to use them.

Are Stablecoins Backed By Anything?

One exception to the idea that cryptocurrencies aren’t backed by anything might be stablecoins. This is because there are several stablecoins that are pegged to the value of underlying assets.

For example, PAX Gold (PAXG) is tied to gold. Each token of PAXG is tied to a troy ounce of gold held in a Brink’s vault. It’s possible to see the serial number of the gold bar that the token is tied to. As a result, this particular cryptocurrency is, indeed, backed by something.

However, it’s not always cut and dry whether a stablecoin is actually backed by another asset.

For example, Tether (USDT) is a stablecoin whose price is pegged to the U.S. dollar. Tether is often used on exchanges, particularly decentralized exchanges that don’t rely on fiat currency, as standard.

But even though there’s an assumption that Tether has enough in fiat assets to cover its issuance of coins, there have been questions raised about whether the Tether coffers really have nearly $80 billion in assets to truly represent a 1:1 backing.

Plus, there’s no max supply of Tether, so the assumption is that USDT would have to keep acquiring assets to hold somewhere as new coins are issued.

What About Tokenized Assets?

Some tokens represent other assets. In this scenario, it's easier to identify the value and actual backing of a digital token.

Tokenized real estate is a perfect example. With these types of tokens, a real-world asset, such as an investment property, is divided into shares. Each token represents a share of the ownership. When profits are generated by the real-world property, token owners receive their share.

These tokens can also be bought and sold on the blockchain, like other coins, so ownership can change hands.

But real estate is just one example. In fact,  tokenized assets could potentially represent any number of real-world assets, from a piece of artwork to an investment-grade bottle of wine.

NFTs are also popular these days and can represent ownership of rare digital collectibles and even virtual real estate in play-to-earn crypto games.

Attempts have also been made to create tokens that represent securities. So it would potentially be possible to invest in stock market funds through tokenized representations of the fund.

However, it’s important to note that these tokenized assets must be trusted as well. Even though the coins are connected to another asset, users need to have trust in the blockchain — including the trust that some transactions won’t be reversed.

How Are Your Transactions Protected?

Another consideration when looking at currency and money is how transactions are protected.

With fiat currency, the third-party institutions buy into insurance to protect assets. For example, a bank pays fees to the Federal Deposit Insurance Corporation (FDIC) for insurance in the event the bank fails.

This insurance can protect your U.S. dollars if the bank fails. Your fiat currency is protected in the U.S. if something happens to the bank. You’ll get your money back, or it will be transferred to a new bank if the original bank fails.

With cryptocurrency, protecting your transactions isn’t as easy. And if the blockchain fails, you don’t have recourse.

Some centralized crypto exchanges, like Coinbase and Gemini, have insurance funds designed to protect against hackers. But that protects crypto assets held on the exchange, not against the failure of a blockchain or bad actors who transact through the blockchain.

Theoretically, transactions and records made on the blockchain are supposed to be immutable. However, a 2016 hack of an Ethereum application known as The DAO resulted in the theft of millions of ether.

Rather than let that situation stand, a consensus of those governing the Ethereum blockchain voted on a hard fork that split the blockchain at the point prior to the hack. This effectively erased the hack and restored ETH ownership to those affected. It also created an incompatible parallel chain, Ethereum Classic (ETC) that still retains records of the hack.

So, while there are ways to get coins back, it’s far from certain that you’ll be protected. But in many cases, it depends on the blockchain and the consensus.

Another consideration is that some cryptocurrencies have characteristics similar to centralized currencies.

For example, when the KuCoin was hacked in 2020, Tether’s team blocked the stolen coins and they were quickly returned. However, Tether was criticized for this move because blockchain transactions are supposed to be immutable and unblockable. The ability to block coins and unilaterally make that choice is a hallmark of centralized currencies.

Credit cards, debit cards and bank accounts all come with some level of fraud protection, allowing you to get your money back. There are no such guarantees or regulations with regard to cryptocurrency. So, even if fiat currency isn’t “backed” by anything tangible, your dollars have some protections built-in that you might not get with crypto assets.

And, just like protecting your bank account and personal information, it's important to take charge of digital asset security.

This means using your own cryptocurrency wallet and properly backing up your private key in case you lose access to your wallet. You can also explore various hardware wallets, like GridPlus or Ledger, to protect your funds.

In many cases, cryptocurrencies aren’t backed by anything.

There are some stablecoins and tokenized assets that are linked to other assets and therefore have backing. However, some of the most popular cryptocurrencies like Bitcoin, Ethereum, and Cardano aren’t backed by any assets beyond the trust users have in the blockchain.

That said, cryptocurrencies and blockchain technology have value. In many countries where the local currency isn't stable, crypto provides an alternative store of value and also makes local and international transactions more feasible. Plus, the range of blockchain projects that are providing more equal access to financial tools like loans and passive income is another benefit.

It’s also possible that, in the future, there will be more centralized cryptocurrencies, especially if governments create digital versions of fiat currencies.

However, as is the case with mediums of exchange over time, any type of money depends on trust and the agreement of the parties involved to accept the currency in return for something of value. 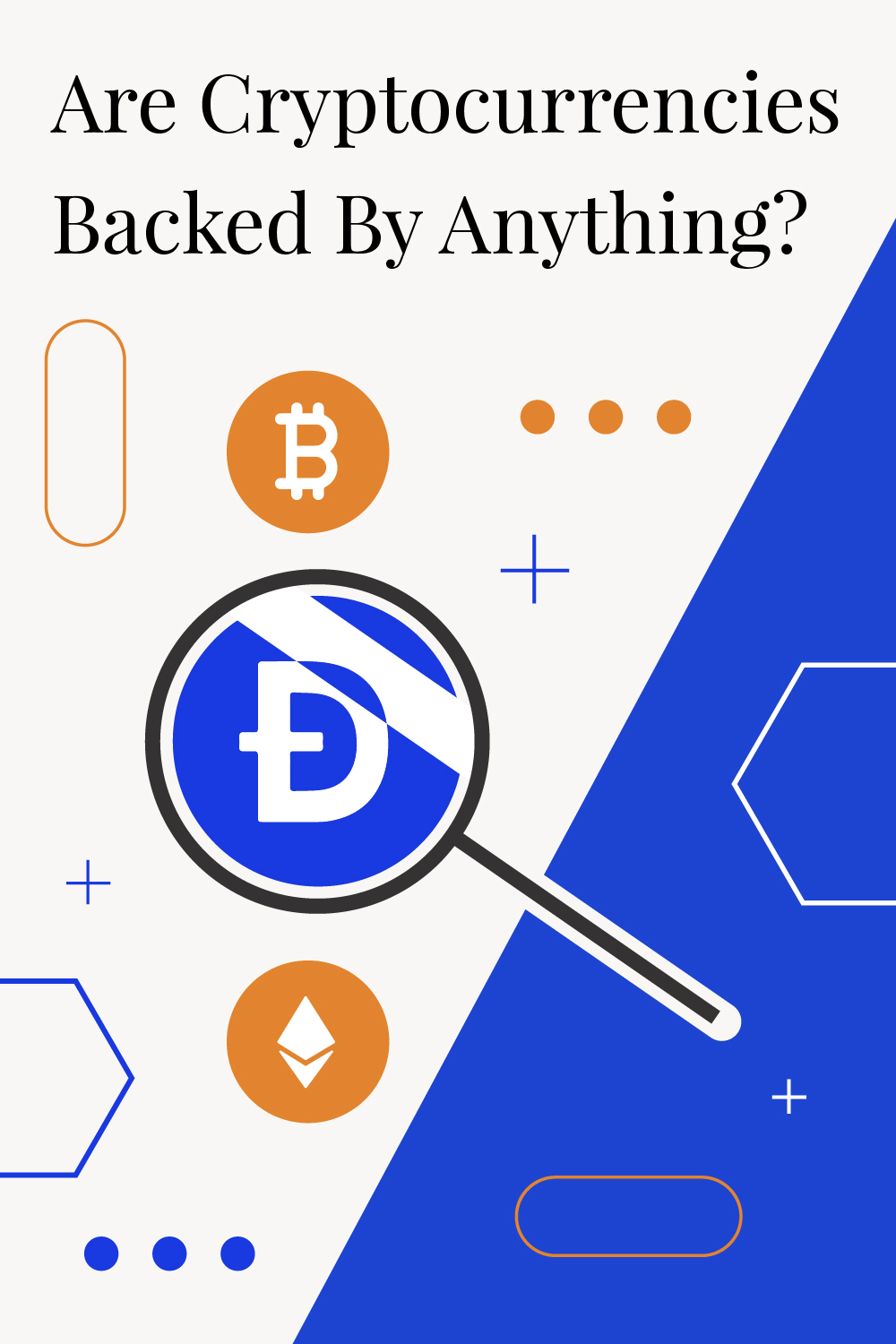