Struggling with Money? Change Your Money Mindset To Buy or Rent: Factors to Consider When Choosing a House 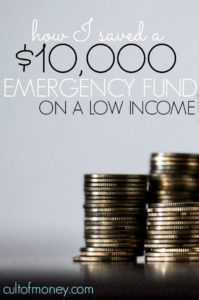 I started saving an emergency fund in 2012. At that time I was a single mom working two days jobs while trying to build an online freelance business.

I had desperately wanted to quit both of my day jobs and freelance full time, there was just one thing holding me back: my lack of savings.

When I decided that a $10,000 emergency fund was my magic “quit my job number” I was determined to make it work.  I was only making close to $20,000, or a little more, per year at this time but I knew I’d find a way to make it happen.

Here’s how I was able to save a large emergency fund on a low income.

I Prioritized My Spending

My first step was to prioritize my spending. I was already on a pretty strict budget but I knew there were a few more things I could do to take it even further.

I bought a $10,000 trailer (took out a loan) that had a $226 monthly payment on a four year term. This one move drastically reduced my living expenses. I also set a strict grocery budget and ruthlessly adhered to it. I didn’t have cable TV and instead took advantage of my Amazon Prime membership and DVDs my girls and I had received as gifts.

Entertainment was kept modest as well. I decided to have my fun on a budget! One of our go to entertainment escapes was fishing at my Dad’s pond which was 100% free for my daughters and me.

After all of my budget slashing I was living on less than $1,500 per month. (Babysitting was my largest expense.)

Next, and probably more importantly, I started my side hustles, which later became my full-time job.

I decided that I was going to make money online by writing for other people. I started out slow only charging $20 per article. Little by little I started amassing clients until I was fully booked.

I saved every single penny of this extra money. It all went straight into my emergency fund.

During the year that I was working hard to save I ended up getting a modest income tax refund (around $900) which went directly to my emergency fund.

On top of that I was working as insurance agent and after landing my boss a very good account I got a $2,500 bonus. Once again, every single dime of that money went into savings.

I Hit the $10,000 Mark With Fierce Determination

After I had my emergency fund built up to a decent amount I ended up quitting the day jobs in order to start my own freelance business online. That was in October of 2013.

Even though I was making a low income at the time I started saving, I was determined to reach my goal. And I think that’s the key – you can accomplish anything in this world if you’re determined and willing to put in the work.

Coupon codes and promo codes allow online shoppers to obtain discounts that they normally wouldn’t when purchasing an item.  Extreme couponing allows carts full of products to go out the […] More
111shares