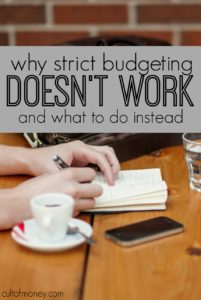 A few years ago money was pretty tight. I monitored every single dollar that came in and out of my bank account and got a high from the sense of control I had over my money. I felt like I was in charge, dominating my personal finances, and for about a year this system worked well for me.

Then after a while I started losing steam. My energy was placed elsewhere and accounting for every single penny I came into contact with was one of the last things I wanted to be doing.

Instead of this system working for me I started to resent it.

My story isn’t uncommon. As human beings we have a limited number of willpower and energy. If you’re one of the millions of people who strict budgeting doesn’t work for you’re not alone. Here’s why and what you can do about it.

For the vast majority of the population strict budgeting just doesn’t work. There are some easy to explain reasons for this, like the fact that expenses fluctuate and can be hard to plan for, that budgeting is boring and can be time intensive, just to name a few.

But beyond this there are also psychological reasons strict budgeting isn’t working for you. Like these:

It’s a scientific fact that as human beings we’re attracted to the things that we can’t have. In fact, restricting can often lead to obsessive behavior which then leads to overindulgence. (Like when you tell yourself you can’t have a cookie but then lose willpower and eat the WHOLE bag of cookies rather than just the one or two you had planned.)

One study showed that self-imposed price restraints actually cause a person to SPEND MORE MONEY! (Read the summary of the study here.)

You Have a Limited Number of Willpower

Willpower is highly overrated. This is because the people you think are achieving their goals through sheer willpower and determination aren’t – instead they have developed systems and habits that help them reach their goals.

In a 2011 Stress in America Survey over a quarter of participants said that lack of willpower was the number one reason they weren’t achieving their goals. And the good (and bad news) is that they might be right.

According to this study willpower is like a muscle. You can use it for a while but using it over and over throughout the day leads to fatigue. The more you resist the more your willpower becomes depleted.

When You Fail You Feel Defeated

With a super strict budget comes a gigantic chance for failure. Those failures, especially if they come early on, can leave you feeling defeated and ready to give up before you even get two weeks into your budget.

Here’s What to do Instead

Just because strict budgeting doesn’t work doesn’t mean all is lost. In fact, it may mean that you can get your personal finances in shape in a much more enjoyable and less stressful way.

Be Honest with What You Want

The first step in setting up a money management system that works for you is being honest with what you want out of life. Your spending doesn’t need to look like some ideal image you have in your head. You have to make plans for what YOU really want to do.

If you want to travel create a travel savings account. If you want to buy a Starbucks coffee everyday then plan for it. If you feel the need to buy a new pair of shoes each month then have at it.

The key to a successful budget is balancing out those wants and needs. You need to do things like pay down debt, save for the future and meet monthly financial obligations but that doesn’t mean you have to do those things exclusively.

When you’re planning out your goals hit those important things first like paying the bills and saving for an emergency fund and retirement and then work with what you have left to meet your wants.

If you still feel like you don’t have enough money your other option is finding a way to earn more.

You no longer have to worry about recording every single expense on a sheet of paper and then matching it to the appropriate budgeting category. Instead you can take advantage of a budgeting app like Mint.com or Personal Capital to do all of the work for you.

Sign up with a free budgeting app and let that app track and categorize your expenses. Your job will be checking in and seeing how things match up every couple of days.

By doing this you’ll be so much more aware of your spending habits and change will come easier.

Automation has been a huge part of helping me reach my financial goals and I don’t know where I’d be without it! Automating your savings and even your bill pay will ensure that you’re meeting the goals you’ve set for yourself.

I automate all of my savings and investing and then spend the rest of my money freely, without guilt. I love knowing that I’ve hit the marks I’ve set for myself and don’t have to worry that I’ve spent too much money on the more fun things in life.

All of my personal finances are now habitulaized. Very rarely do I have to think about anything I’m doing. I create a goal, set up a system (usually automation) and everything comes together naturally.

Creating habits does take time so if you’re just starting out it might seem like you have a lot of work to do. In reality you can make a huge difference in just a month. Start by working on the areas that make the biggest difference to your budget.

Create one habit (like spending less on your vice if that’ a problem for you) and then move to the next.

There are things in life that I thought I couldn’t live without, like cable TV. It wasn’t until I gave up those things (normally unintentionally) that I realized they weren’t that important to me after all.

If money still feels tight after you’ve set everything up experiment and see what you can easily go without it and what you can creatively replace.

Experimentation can go a really long way in helping you set up a budget that does work for you.